To say Sprint was a phenomenal missile, is putting it mildly. A cone shaped missile that accelerated at 100g, achieved a speed of Mach 10 in 5 seconds, had an ablative coating to dissipate the heat that was generated from the fiction from the atmosphere and was so accurate that the radar had to be de-tuned during testing so that it would not hit incoming RVs. It was a phenomenal missile.

Sprint came about from a study that started in 1959 as a result of identifying the need for a quick acting last ditch missile to intercept incoming RVs, specifically those from sea-launched ballistic missiles (SLBM) and to also intercept RVs that may have got through the higher layer defence. It took three years of research before the study concluded that with the use of phased array radars and appropriate heat shielding, such a terminal defence missile was possible. As a result, in January 1963, the DoD directed that the Nike-X system be developed which included not only the Nike-EX missile (subsequently Spartan), but also another missile called Sprint. In March 1964, Martin Marietta was awarded the development contract for the Sprint missile. 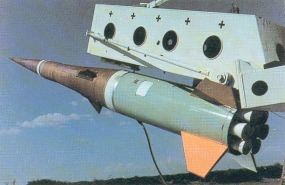 No missile like Sprint is created from a vacuum. Spartan came from years of development of the Nike Zeus missile, and so various programs and other missiles were used to assist the Sprint program. One program which ran concurrently with Sprint for a short time was HiBEX (HIgh Boost EXperiment).

Another program involved which was designed to test Sprint components was called Squirt. It had a different booster to the Sprint missile, but the second stage of the missile was comparable to the Sprint missile. It was used during 196? at White Sands. Its first flight was on 14 July 1964, with another six flights following with at least one more in 1964. Some sources report that flight testing of Sprint components started at White Sands early in 1964 with the first Sprint launch taking place in November 1965. These early flights probably would have been of Squirt missiles 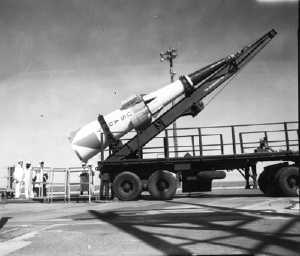 Sprint was 'popped' from its launch silo by a powder gas generator which propelled a piston on which the missile rested. The missile was pushed through a membrane at the top of the cell, while the piston is stopped at the mouth of the silo. Once clear of the cell, the first stage was ignited and the missile tilted over in the direction of the incoming target. Aiming the missile so early in the trajectory reduced the forces involved in moving the missile's trajectory and allowed a very fast interception to take place. Some reports indicate that the missile was supersonic by the time it left the cell.

The first stage had a short burning time, with the second stage igniting 1.2 seconds after launch. Flight control during the 1st stage burning is via fluid injection. Second stage control is obtained via the small aerodynamic fins. Detonation of the warhead was on ground command and was expected to be at an altitude of between 1500m and 30,000m (5,000ft and 100,000ft). The incoming RV was expected to be destroyed by both the nuclear blast, and the high velocity neutrons. (The Sprint warhead was infact one of the so called'neutron bombs' that caused so much controversy during the 1970s). The complete interception was expected to take less than 15 seconds.

Air friction alone during flight of the missile generated temperatures of up to 3400°C (6200°F), and the ablative heat shield could dissipate heat at rates up to 850 BTU/ft/sec. Sprint was also constructed to withstand shocks up to 25,000Gs which meant it could handle nearby nuclear explosions and their resulting blast (how hardened it was to EMP and radiation is unknown). When in flight, the missile was surrounded by a plasma sheath which the command signals from the MSR were able to penetrate. This was achieved due to the sheer high power of the MSR (a beam that was less than 1 degree wide, and had a power of at least 1MW).

At Kwajalein, missile launches took place from Meck Island which also had a MSR with a single phase array. However, in an operational system Sprint could also be fired from a site which was not co-located with the MSR. To test this capability, a second Sprint launch facility was constructed on Illeginni Island which was north of Meck Island. The first launch from this second site took place in March 1972 and was successful.

Sprint was a a cone shaped missile, with four small fins approximately 40% of the way up the missile near the base of the 2nd stage. Sprint was armed with an enhance radiation nuclear warhead in the low kiloton range. This replaced a megaton warhead which was canceled in 1968.

Development and interest in Sprint did not end with the flight testing of the missile. Martin was awarded a definition study contract for Sprint II in May 1971. This was followed by a design contract in October 1971. In May 1972 a contract worth $168 million was signed for the development and flight testing of Sprint II. The main improvements of the Sprint II missile included greater accuracy, a manoeuvring capability three times greater than the original Sprint, improved reliability, hardening and strengthening against the increased manoeuvring forces and the final improvement included a faster launch process. No known launches of Sprint II were done, and investigations into such a missile were completed during 1983 as non-nuclear forms of ABM defence started taking precedence.