The Nike Zeus missile has a very interesting history. Two major versions of it are known, with a third version produced for ASAT duties. The same missile was further developed, but was renamed as Spartan as the radars and deployment changed during the 1960s. 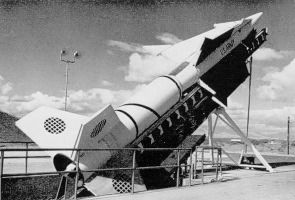 The Nike Zeus A is aerodynamically very similar to the Nike Hercules, just scaled up. However, the Nike Zeus A was designed for a very different mission - it was designed to perform an interception of ballistic missile RVs at high altitude. Like Nike Hercules, it was a two stage missile but instead of using the Nike Ajax booster, a new booster was used which was the largest single chamber solid rocket motor produced in the US at that time delivering over 450 000lb of thrust.

The Nike Zeus A had a very short life as it only had a small number of launchers before being replaced by the Nike Zeus B. As a result, some sources claim that this was infact a flight test article for the booster and not actually a Nike Zeus missile at all. I find this hard to understand as the 2nd stage is new, or at least the fins have been redesigned (especially when comparing it to a Nike Hercules), indicating some design work had taken place for this missile.

The capability of the missile was constrained by the 200 mile range restriction that was issued by Secretary of Defence Wilson in 28 November 1956. This restriction was rescinded 12 months later once Sputnik 1 had orbited the earth. This then allowed the US Army to then develop the Nike Zeus B which overcame some of the limitations already present and known in the Nike Zeus A. 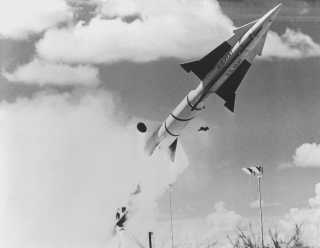 Nike Zeus B was a far more capable missile than the A version due to a number of factors. It had a greater range, it was a three stage missile and it was designed to intercept targets outside the atmosphere. The main reason for this missile being developed was due to the dropping of the range restriction that had been imposed during 1956/7. By increasing the range, the missile could defend a much larger area which meant that fewer installations were required which provided some cost savings while still maintaining a defence.

The first stage was the same as that of Zeus A, but everything after that was new. The second stage had a slightly smaller diameter than the booster, while the third stage was slightly smaller again. The large aerodynamic fins that were so prominent on the Zeus A sustainer were gone, and replaced with small vanes at the top of the missile which provided some control while in the atmosphere. Once the missile had left the atmosphere control was obtained through the 3rd stage motor. Target destruction was obtained through the use of a nuclear warhead. This warhead was tested during 1962 at Christmas Island in the Pacific Ocean.

With the Nike-X ABM system, studies went into an extended range version of the Zeus B, and that missile was called Nike Zeus EX. It was renamed as Spartan when Nike-X was renamed as Sentinel in 1967.

Due to the improved performance of the missile, it was no longer possible to test the missile at full range at White Sands. The Naval Test Range at Point Mugu was upgraded with the necessary radars and equipment to allow launches to take place there. However, Pt Mugu also proved unsatisfactory due to range safety restrictions which caused a number of good missiles to being destroyed early in their flights.

Suitable sites were then investigated in the Atlantic Range area, but due to the sensitive nature of the missile firings, using foreign countries for the testing was deemed unacceptable. Attention then shifted to the Pacific, and Kwajalein was chosen. On February 12, 1959 the DoD aproved a test program for Nike Zeus which used Kwajalein as the launch site for the missile. 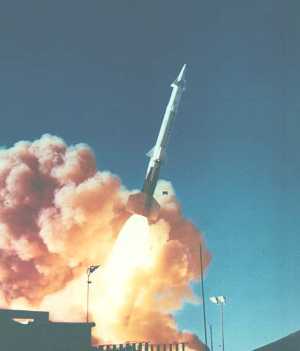 In April/May 1962 Defence Secretary McNamara agreed to a US Army request to reorient the Nike Zeus missile into an anti-satellite program. This program was called Project 505 with a code name of "Mudflap".

To achieve this, a modified Nike Zeus missile was developed designated DM-15S. To allow the high altitude, long rage interception, a number of changes were made to the missile. These changes included a two stage hydraulic pump, a higher performing booster propellant and a longer life battery (5 minutes instead of 2).

On 27 June 1963 McNamara ordered that a Nike Zeus missile be kept ready at all times at Kwajalein complete with a live nuclear warhead. The US thus had an operational ASAT capability. Although not directly related to the Nike Zeus, the US Air Force had also deployed in the ASAT role Thor IRBMs which were based at Johnston Island. Despite performing the same mission, the two missiles complemented each other. The Nike Zeus was a faster reacting missile, but was limited by its range. The Thor was a slower reacting missile due to its liquid propellants (and during the last part of its life as an ASAT missile, its reaction time was measured in weeks), but Thor had a much greater range. McNamara eventually believed that the two ASATs competed with each other and only one should be deployed. Thus in May 1966, Program 505 was declared redundant and it was directed to shut down thus leaving the Thors to perform the ASAT role.

On a side note, Hurricane Celeste caused extensive damage to the facilities for the Thor ASATs in August 1972 and repairs were made. Once put back on active service, it was found that the damage was more extensive than original thought and in December 1972 the Thors were phased out from operational use.